Its Ishan again, bringing you the updates of my work as a summer student at ASIAA,Taiwan. To recap quickly, I am working on creating simulated MBC images with variable attributes like the direction of motion, brightness of tail and coma, etc. My work till last week consisted of creating the coma around a one-pixel wide nucleus and trying to trail the image. I got a weird output and was trying to figure out what the problem was.

By the way, in my previous post I forgot to mention the reason we are trailing the coma. Well, when we image astronomical objects using telescopes, we usually use a large exposure time in order to collect sufficient number of photons. This is about 150 sec for imaging asteroids. Now the asteroids move significantly faster on the plane of the sky than the background stars due to their proximity to earth and hence cover a distance of a few arcsec in this interval. Hence, we see a stretched out, elliptical object instead of a circular one.

Coming back to my work, I’m glad to inform you that we figured out the issue! It was a pesky function I was using to shift the coma image to create the trailing effect (the function is ‘shift’ from the python module ‘scipy.ndimage.interpolation’). The function works as follows: It takes the image to be shifted and a 2D shift-vector as the arguments and shifts the image according to the shift-vector. It obtains the value of each pixel in the shifted image using interpolation. As it turns out, the default order of interpolation for this function is 3 which is unnecessary and the cause of all the trouble. Setting the order to 1 along with a shift vector having integer elements resolves the problem. Here is a trailed coma image with the corrected shift function. Looks better, doesn’t it? 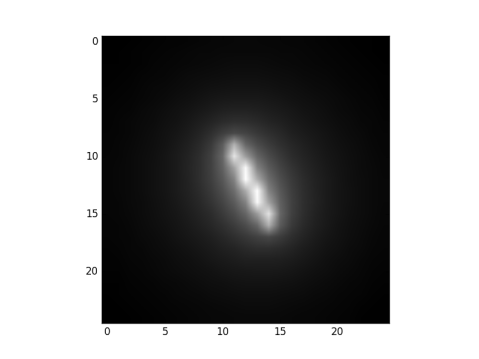 Note: The image looks very pixelated due to the low resolution. Interestingly, this very closely resembles the actual resolution of the Subaru Telescope’s Hyper Suprime Cam from which the actual images are taken. However, we still need to figure out a way to make the image smoother and minimize this pixelation. Onto the next challenge!

We are a step closer to the final trailed image and I will be back with the updates next week!