Main-belt comets have a wide variety of appearances, or “morphologies”, depending on the strength of their activity, nucleus size, angle at which they are viewed from the Earth, just to name a few of the factors involved. As you look through objects in Comet Hunters, you may wonder what kind of features you should be looking out for.  This can be a hard question to answer given the diversity of possible morphologies of main-belt comets though, so in this case, it is perhaps easier to show, rather than tell.

So, first, here is a gallery of representative images of nine of the main-belt comets known to date.

Complicating matters more, the appearance of an individual main-belt comet can vary over time, as its activity strength changes as it approaches and then passes through perihelion (its closest approach to the Sun in its orbit), and/or due to changes in observing conditions between different observations (i.e., on different nights or even different times in the same night, or at different observatories at different locations in the world under different weather conditions).  Below are several series of observations of various main-belt comets taken over periods of several weeks, months, or years using a variety of telescopes (ranging in sizes in terms of primary mirror diameter from 1.5m to 10m) to help illustrate this point: 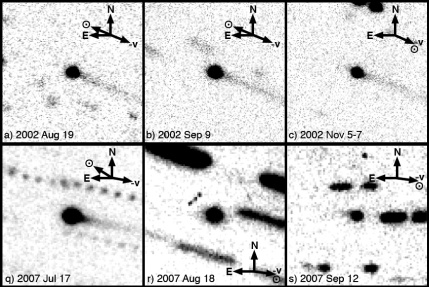 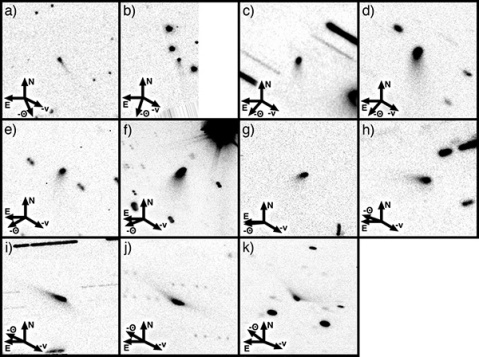 Note: Many of these images are created by adding together several individual images to make a composite image equivalent to leaving the telescope shutter open for up to several hours in some cases.  During this time, the main-belt comet appears to move relative to the background stars.  From the comet’s perspective though, the stars appear to move, and so the series of dotted streaks you see in many of the above images are background stars or galaxies that have been imaged several times (while “moving” between exposures) and then combined together into a single image, keeping the comet at the center of the image at all times.

This rich variety in main-belt comet morphologies is a big reason why we started the Comet Hunters project, given the difficulty of creating computer algorithms capable of identifying several different types of activity.  There are still some things that computers can do better than the human eye (such as measure small differences in the profile “widths” of candidate objects as compared to nearby stars), but we hope that the combination of citizen science and modern computing, we will be able to discover many more new main-belt comets.