Today, I thought I’d give you a different view of the camera and images that you currently see on Comet Hunters. Right now we’re showing archival images of asteroids from the Subaru Telescope with Suprime-Cam.

Suprime-Cam can image a 0.25 of a square degree patch of sky in a single observation, that’s a bit bigger than the size of the full moon as viewed from Earth. Until a few years ago with the first light of its successor instrument, Hyper-Suprime-Cam, Suprime-Cam reigned as the largest field-of-view camera on the 8-10-m class telescopes,currently the largest ground-based telescopes. Suprime-Cam is an 80-mega pixel camera weighing in at 650 pounds and located at the prime focus of the Subaru Telescope. You can learn about the camera first light and commissioning here and about the upgrade of the camera is 2008 here.

Suprime-Cam is equipped with 10 CCDs (charged coupled devices) that actually receive the photons and and are read out to produce the images we show on Comet Hunters. Subaru has two rows of 5 CCDs. You can rotate the direction of the camera as well.  If you display all 10 CCDs from a single observation it looks something like this if you have the widest part of the camera along the East-West direction (for Right Ascension). If the full moon was imaged it would fill most of the imaging plane: 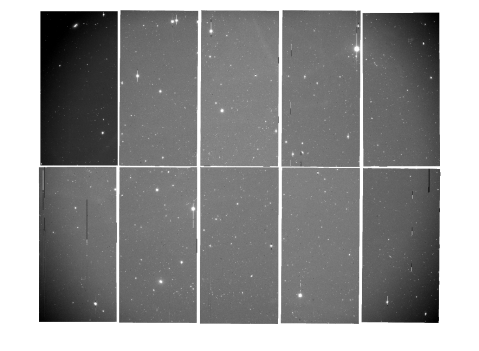 You can see the different CCDs and amplifiers that read out the electrons trapped in the CCD’s wells are  slightly different from each other as well as the effects of how light travels through Subaru’s optics. We can take all of that out with calibration observations (flat field observations, dark and bias images). This image is pretty much a raw image off the telescope.  The white lines in a grid are the small gaps/boundaries between each of the different CCDs.  Let’s zoom in a bit further between the two center CCDs so you can get a better view: 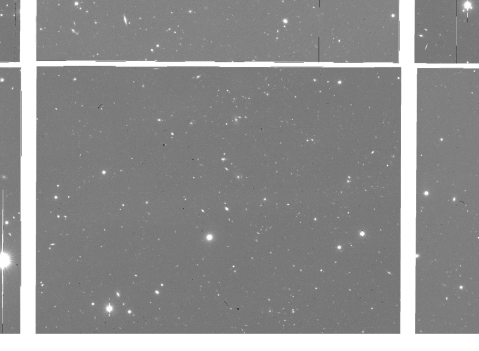 Now (in the above image) you can start to see how many stars are on each of those CCDs. And if we keep zooming in… 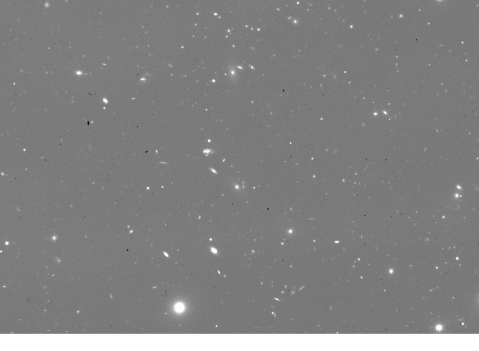 We show a much more zoomed in image on Comet Hunters focused very close around the asteroid and reference stars. 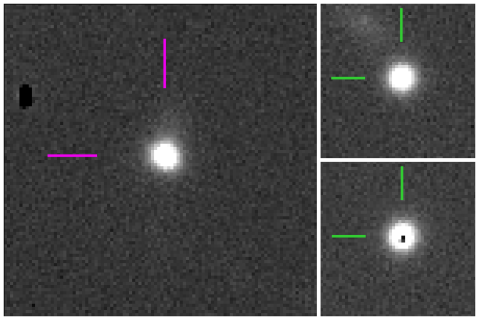